The last story features a short cameo by the Ultimates, and the main co-star Dr. Dec 28, Fellipe Moscardini rated it really liked it. This review has been hidden because it contains spoilers. To view it, click here. This was a mixed bag and very strange. While the last arc was really dark and dealt with some really heavy stuff, this one, for the most part, was lighter, funnier, and a bit of a filler between arcs.

Very silly and goofy. The Human Torch encounter was light hearted and fun. The Doctor Strange or son of Strange encounter had some very creepy and nutty visuals, but the story seemed a little pointless. The only thing that really stood out apart from the art was the moment when Peter is locked in his basement and Mary Jane arrives for their fancy date. That part was heartbreaking. Overall, it was a solid read. May 03, Wing Kee rated it it was ok. Wow that was not what I expected World: Bagley's art, not a fan.

The world building here this arc was supposedly fun and expanded the universe. It does do that to some extent, you can say that about the world building this arc, it is still Bendis strong. Story: What the what is this? After the huge heavy stuff of the last arc and it just ending I would have thought we would get some development on that front but we don't till the very end.

Instead we get freaky Friday I know sometimes light arcs after heavy ones are great Brubaker Catwoman comes to mind , but this is not that. This is a dumb slap sticky idiotic story followed by an emo story with Peter putting on his costume again so very easily, what the what. The Strange story was also a bit wonky but the last issue was strong. This arc is a mess. Characters: There is still some good to be found here. It's just out of place. I know what MJ is doing and it makes sense but the rest of it is just not what I expected.

The characters are overshadowed by dumb stories. Argh what the what!!!??? Onward to the next book! Feb 03, K. McDevitt rated it really liked it. This was an interesting volume full of one or two-shot stories. We open with a body switch between Wolverine and Peter which was confusing only because it seemed to come out of nowhere and wasn't explained until the end. I remember seeing this happen during an episode of the Spider-man tv show and enjoyed it then; this didn't have the same magic, though there were definitely some fun moments as they had to deal with being in each other's bodies.

That was awesome, even if it didn't end particularly well for poor Johnny's love life or normal life for that matter. I looooooved that Reed built a watch that monitored Johnny's use of his powers. Of course he would. And then Dr. Peter's dream world was sad and disturbing.

Poor sweet kid, just wants to use his powers for good. He doesn't deserve all this. I suspect that's not the last time I'll think that during this series read. Jan 06, Edward Cheer rated it really liked it. At first, I considered this was going to be a three-star book, but that kind of changed the more I got into this.

This particular comic has three different stories. The first was cheesy and dumb Even Brian Bendis comes out before the story starts to tell you he's sorry about it , but it wasn't that bad. It's the second story that does well for that element of Spider-Man being a mentor figure that works really well, and particularly the third story is the one that shines the best. The story tell At first, I considered this was going to be a three-star book, but that kind of changed the more I got into this.

Feb 21, Jerome rated it it was amazing. It made me cry, I was laughing so hard. It's so unexpected. I liked how Wolverine in Peter's body pisses everybody off, including MJ and Aunt May, gets irritated at the teacher, and awkwardly tries to control his new Spider powers. Also funny is how Peter in Wolverine's body constantly complains at how filthy and disgusting Wolverine is, beats up robbers, and gets himself arrested. Unfortunately, the story was a little too short and sloppily resolved. Also, that story arc instantly overshadows the other ones, which were very forgettable.


And we see our hero grow up with each issue as he takes all the tragedy that comes in his way with utmost integrity and tries to make the right of the wrong. Feb 06, Justin rated it it was ok Shelves: comics.

This one's easily the worst volume of USM so far. The opening story with the Wolverine body switch is just unbearable.

The final story with Dr. Strange feels pointless, and suffers partly from irrelevance and a stupid plot device and partly from the heavy-handedness of having a nightmare sequence to make sure we all understand exactly what Peter's been dealing with. All of those emotions and concerns This one's easily the worst volume of USM so far. All of those emotions and concerns are much more compelling and affecting told with more restraint in his regular setting rather than in this manner.

What Is... Ultimate Spider-Man Vol. 1

Feb 02, Jennavier rated it it was amazing. This is basically an entire issue of team ups, so if that's not your thing you should probably steer clear. Most of them were pretty mediocre, just the general back door introduction to other lines that you can expect in a popular series. What really made it was a two issue arc that involved Peter and Wolverine switching bodies. 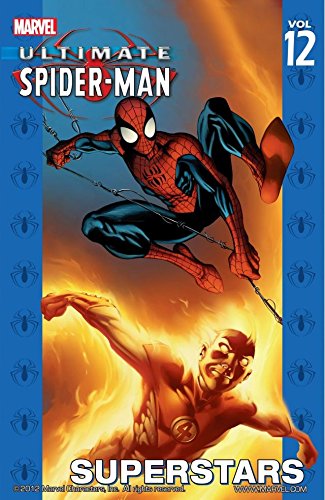 Not an actual story arc, but a collection of shorter stories. The intro of Johnny Storm to Peter Parker's life was fun to read, but the other two stories?